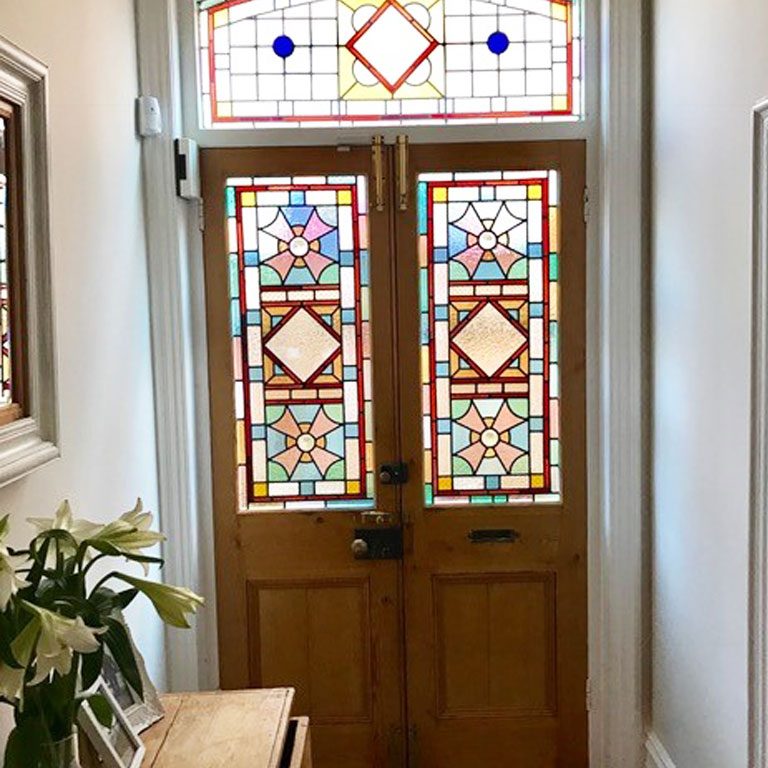 Glass only became commonly used to provide windows for houses in the 17th century, although stained glass had been installed in ecclesiastical building prior to this. These stain glass panels were made of small coloured pieces of glass held together in frames of lead. Some of these are most elaborate, especially the rose windows in the larger cathedrals. They were colourful and intricate, often based on religious themes and saintly figures depicting scenes from the life of Christ. In the eighteenth century it became more common to use stained glass in domestic dwellings and homes.

In many Victorian houses you will find leaded lights of a much simpler design in the entrance hall or in the top half of simple doors throughout the property.

In 1840 there was a great interest in all things medieval, mainly championed by the Arts and Crafts movement – hence the fashion for the stained glass window often in the front door of the Victorian villa. Mackay Hugh Ballie Scott was well know for his beautiful designs in stained glass, the most famous of which is in the Lake district at Blakewell House. It’s a floral design of pinks and greens that compliments the outside space brilliantly.

It is an additional feature you can re create in your home to work in perfect harmony with the architectural style of your house, whether you have a simple country cottage, an Edwardian town house or a thirties family home. This traditional craft can be a source of light and colour, streaming warmth and character into the house.