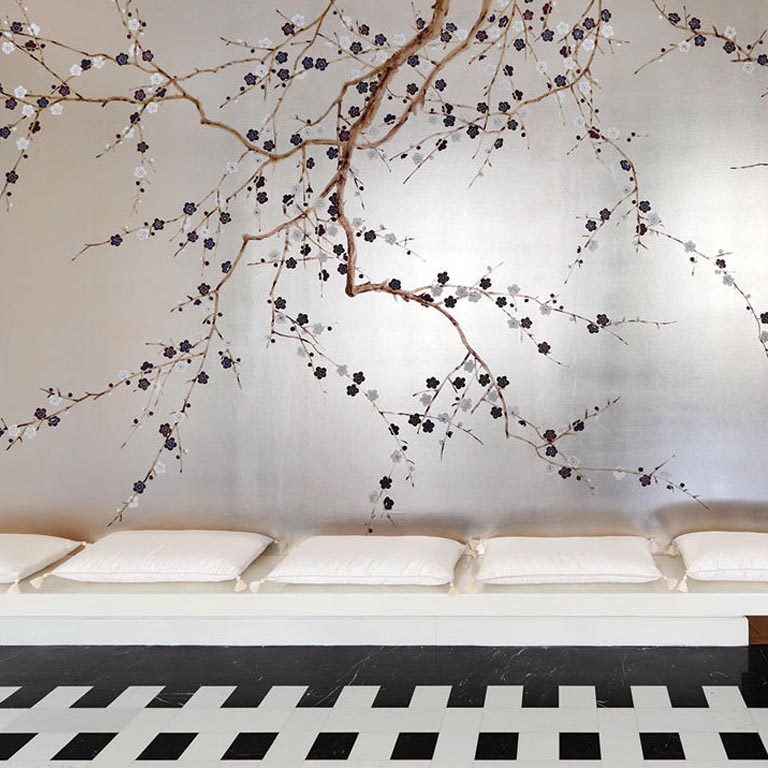 Thousands of years steeped in tradition have crafted Japanese architecture and interior design aesthetic, resulting in a serene and very unified overarching look. Japanese style evolves around clean and uncluttered living, holding tightly to balance, order, ancient customs and a love for natural beauty. Married to this are the beautiful and rich designs of the kimono and the enduring art of the artist Hokusai.

Hokusai’s Wave is a very recognisable picture seen on many calendars and household objects. In other paintings Hokusai’s use of colour and imagery within the discipline of his art gives the interior designer inspiration to use the drama of the samurai warriors’ armour or the gentle portrayal of the Japanese countryside to inform their mood board.

The cherry blossom is celebrated in many fabric and wallpaper designs. De Gournay have a whole collection of wallpaper based on Japanese influence. This was created in the nineteenth century when interest in the Far East was at its height.

Graham and Brown have taken the images of Japanese landscapes as an influence for their Himitsu wallpaper available in several colurways.

Japanese culture is characterized by its ability to merge its own tradition with modern influences. This same attribute is what shapes modern Japanese design, which developed in the 1950s, and the ideological background which came from Masaru Katsumie, who was a follower of the Bauhaus movement.

In recent times other designers have used the traditional to create new objects based on the art of paper Origami. Several lights made from paper are available from Heals that will bring that feel of serenity and simplicity to your home.