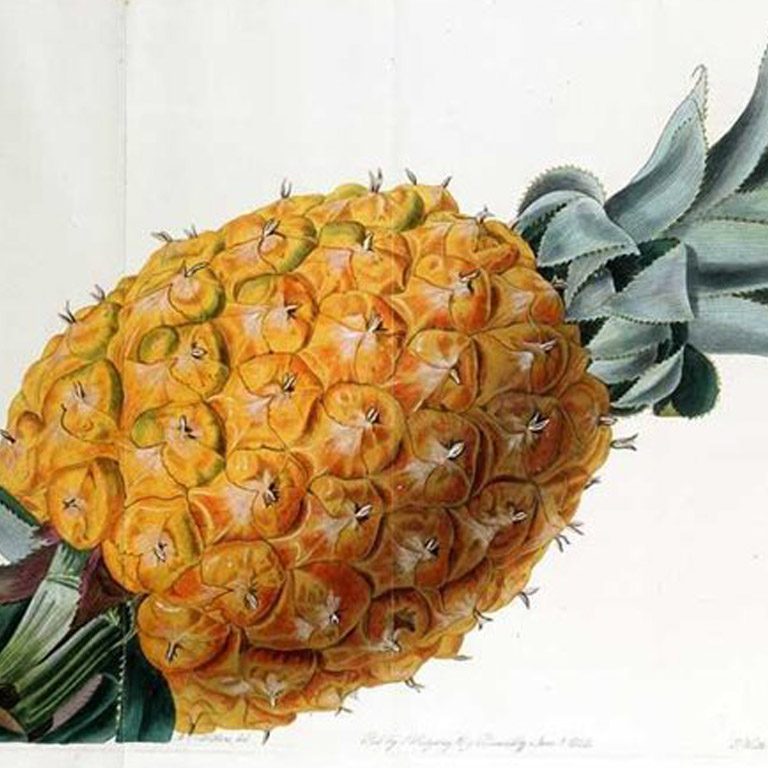 The trend for things tropical has meant the pineapple has become the fashionable motif of last few years. The pineapple in the past has served as a symbol of welcoming hospitality and friendship in the home, particularly in the Southern States of America where often door knobs and weather vanes are shaped like pineapples to denote a welcoming atmosphere. Also it is often placed centre stage on a table as a decorative piece in metal, usually gold or glass to give cheer to guests and make the table look festive.

An early example of the shape and style of this fruit being used in architectural design is the Dunmore Pineapple house near Falkirk dating back to 1761. Built by the Earl of Dunmore as a summer house, its large, bulbous shape overlooks a walled garden and contains a hothouse for growing pineapples.

In the domestic setting, this spiky fruit is also seen in many fabrics such as one called Pineapples by Barnaby Gates, available in four colourways. This fabric would look fine in a conservatory or a south facing bedroom. Sanderson also use this exotic image in a fabric called Pineapple Royale. This is a durable linen mix which would grace any dining room. To compliment this, add one of the botanical prints from the Royal Horticultural Society on the surrounding walls.

In wallpaper it has been used to great effect in a Mathew Williamson design called Ananas. This is a more abstract interpretation of the fruit and is playful and colourful. This would work well in a kitchen diner or a study. It’s a fun and imaginative re working of the staple.

Often the shape of a pineapple appears as the base of a lamp or in various other home accessories such as ceramics and glass objects. The combination of the tropical ambience, the unusual shape and dramatic leaves means this look will always have a place in home decor. It’s both special and familiar adding that touch of quirk and charm to any room.